This has been our major landscape scale project to deliver on-ground works for enhancing the environmental, social and economic values of the upper Little River Catchment area by improving connectivity/biolinks of existing vegetation of the Brisbane Ranges National Park and the Little River. Funding has been provided by a grant from Vision for Werribee Plains program and co funded by Melbourne Water .

Landowners along the Little River have been extensively fencing along the river, removing and managing weeds, encouraging regeneration and revegetating with indigenous plantings.  In all some 15 km of the Little River frontage is involved in this project.

Andrew Prime, project coordinator, completed the final report of the Little River Project in November 2014. This was the largest revegetation effort ever undertaken by our Landcare group with superb support, both in terms of funding and expertise, from Melbourne Water, Vision for Werribee Plains, CMA and the Commonwealth Government.

Among the highlights of the program:

This biolink project is being extended through the new funding received in 2013 for the Brisbane Ranges - Port Philip Bay Biolink.

There have now been a number of groups who have toured the site to see the excellent progress of this project.

Sorry - this event has been postponed!   Join us for an informal BBQ at Anakie Gorge picnic ground starting at 6:30pm.  A chance to catch up and have a chat to friends you may not have seen for a year! Meat provided but if you can, please bring a salad or dessert to share. Don’t forget your favourite camp chair and the Aerogard!

See our January newsletter for more.     Please register online so we know you are coming

Do you have your special BRLG calendar yet - a few left 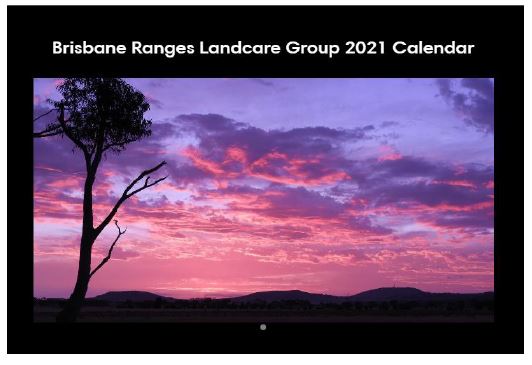 The calendar features photos from the Brisbane Ranges and surrounds, taken by locals who love where they live! You will be amazed by this collection of beautiful images which capture the diversity, tranquility and beauty of the land, and the creatures we share it with.

SPECIAL  - a few left so now just $10 for locals so why not purchase one for yourself, and one to send to family and friends who live further afield?

Free delivery for locals or we will post to those further afield (add $5 for postage).

Order yours now before they are sold out!

Stay safe and well and catch up on our latest newsletters.

Plant more trees on your property for Koalas!

Some locals around You Yangs and Brissies are getting more Koalas trees planted this winter.  Planning for next year is underway so please contact Koala Clancy Foundation if you want some help getting new trees into the ground. They work with Landcare, 15 Trees and Melbourne Water to help.   info@koalaclancyfoundation.org.au

See Links for publication - Start with the Grasslands

Thanks to a Melbourne Water Group Support Grant for website assistance. Contact Caz to add any links, suggestions and comments.